A Record of a Mortal is Journey to Immortality Wiki
Register
Don't have an account?
Sign In
Advertisement
in: Characters, Female, Human,
and 4 more

Chen Qiaoqian, commonly referred to as Sister Chen, is a cultivator presiding in the State of Yue. She is a member of the Chen Clan and the Yellow Maple Valley Sect. When she was a Qi-Refinement cultivator she experienced a life-death situation followed by an intimate encounter with Han Li that she is unable to recall. Ever since that incident, she has been tirelessly searching for the individual who had saved her.

“Junior Martial Sister Chen was an exquisite and ravishing beauty, dainty as a flower„

Chen Qiaoqian had a crush on her fellow Yellow Maple Valley Senior Sect member surnamed Lu who was from the Lu Clan. Unfortunately for her, Sect Member Lu did not reciprocate her feelings and instead intended to use and discard her.

In a cave near Yellow Maple Valley, she was bound by her fellow Sect Member Lu using magical spells, and stripped. She was forcefully drugged using a"Joyous Meeting Pill" that altered her mental state. Fellow Sect Member Lu intended to rape then kill her to prevent her from speaking to her fellow Chen Clan and Hong Fu - a Yellow Maple Valley elder that would surely have killed him.

Luckily Han Li unwillingly rescued Chen Qiaoqian from this unfortunate series of events by killing her fellow Sect Member Lu after unintentionally being discovered nearby. Unfortunately, she had already been forced to consume the "Joyous Meeting Pill" and was not in control of her own body. Unable to exert control, she had an intimate encounter with Han Li after being released from the magical bindings when Han Li killed fellow Sect Member Lu. Han Li managed to regain control and subsequently knocked Chen Qiaoqian unconscious using a "Soul Lock Talisman". Using "Pure Spirit Powder", Han Li was able to undo the effects of the Joyous Meeting Pill.

Chen Qiaoqian awoke the next day with faint memories of the incident that occurred. However, she was unable to remember who had saved her. She was furiously embarrassed remembering that she had an intimate encounter with her savior. Furthermore, she found that her Foundation Establishment Pill was missing from her personal storage pouch.

Trial by Blood and Fire[]

Since her Foundation Establishment Pill was taken from her, she needed to participate in the dangerous Trial by Blood and Fire to collect Spiritual Herbs in order to obtain another pill. Without the pill Chen Qiaoqian would be unable to break through to the Foundation Establishment stage and be forever stuck at Qi-Refinement until she died of old age.

Chen Qiaoqian participated in the trial with her elder brother. Together they survived battles with other Qi-Refinement cultivators, exiting the trial grounds on the final day. When Han Li had exited the trial grounds he was unharmed.

"Han Li had not given this Junior Martial Sister Chen any good impressions. She always reckoned that Han Li was someone who had run into a great deal of good fortune and always took the opportunity to escape from a fight."

War with the Demonic Dao[]

Fortunately for Chen Qiaoqian, she was not given very many assignments on the front-lines of battle between the Seven Sect Alliance that the Yellow Maple Valley Sect was a member of. After returning from running an errand for her Uncle, she found Han Li casually interacting with her uncle. After Han Li departs, she derides Han Li and learns from her Uncle that Han Li is considered a desirable individual to recruit.

"Qiaoqian, you’ve just arrived here and are ignorant about some matters. Although I don’t know why you think this guy is a scaredy-cat, your fellow sect member’s reputation here is not small! He is an extremely strong character who exterminated over ten Foundation Establishment cultivators in succession and is definitely not a mediocre individual. I even want to recommend this person to the clan leader after a few more battles. If we can win over this guy, he will be a great help to us!"

Chen Qiaoqian joined a group of Li Huayuan's Foundation Establishment disciples on a mission to destroy the Black Fiend School that been consuming the souls of Rogue Cultivators using the Blood Sacrifice arts from the Devil Dao. When she first met Li Huayuan's disciples she was one of two individuals that were not surprised to hear of Han Li's fearsome reputation as a combat expert that effortlessly killed Foundation Establishment Cultivators of the Devil Dao.

Chen Qiaoqian fought in a battle between the Yellow Maple Valley and the Black Fiend School. She was tasked with rescuing the Emperor of Yue, only to discover through the death of one of her fellow peers that the Emperor was actually the leader of the Black Fiend School. Several times during the fight Chen Qiaoqian needed to use magical treasures to shield herself from lethal attacks. She found herself powerless when the Emperor of Yue had ascended to the Late Foundation Establishment stage through a sacrifice. Chen Qiaoqian focused on defending herself and Zhong Weiniang against the attacks of the emperor. She In a last ditch effort with Han Li, and Song Meng, she was able to distract the Emperor of Yue long enough for Han Li to deliver the killing blow.

Sometime after the battle, the 2 of them went on a little date for some sight seeing.... Chen Qiaoqian confronted Han Li letting him know she was to become the Dao Companion of some unnamed cultivator as a last ditch effort to test whether Han Li was the individual whom had both saved her and had an intimate encounter with her. Unfortunately Han Li outwardly responded by congratulating her while his inner thoughts were in deep turmoil. Chen Qiaoqian was inwardly frustrated as she was nearly certain Han Li, having saw his strength during the battle, had been the individual she was looking for. She was sure that she would never resolve the mystery if it wasn't Han Li. After some thoughts, she left angrily seeing that Han Li is still being stubborn about trying to concealed the truth from her, thus Chen Qiaoqian and Han Li parted ways.

After almost 2 centuries later when Han Li finally returned to South Heaven, he met with fatty Elder Lei, a Core Formation Stage, Chen Qiaoqian brother and a few other members of the Yellow Maple Valley sect... he found out from her brother that Chen Qiaoqian never gotten married because her so-called-soon-to-become Dao Companion actually betrayed the Seven Sects the first chance he got... therefore she died single many many years ago... Han Li actually lost his composure hearing the news because he felt a pain in his heart even though he kept telling himself that he does not have any feeling for Chen Qiaoqian.

After hundreds of years since Han Li already ascended to the Spiritual World, he met a girl from a different race who look exactly like Chen Qiaoqian for a brief moment, even though he pretended to be indifferent on the outside, his heart was in a turmoil, which made him think back to their intimate moment...and she still managed to felt Han Li gaze and also look back... Han Li also thought that she's definitely the reincarnation of Sister Chen, but unlike his disciple Tian Qin'er who is the reincarnation of his friend in her previous life, this girl is not human...therefore, Han Li decided not to greet her and thus they goes their separate ways... [1]

A magical treasure that is first released as a small fiery sword that grows at the will of the wielder. The sword invokes fear in even Late Foundation Establishment cultivators. 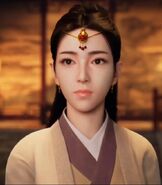