A Record of a Mortal is Journey to Immortality Wiki
Register
Don't have an account?
Sign In
Advertisement
in: Characters, Female, Core Formation,
and 4 more

Han Yunzhi is a cultivator from the State of Yue within the Heavenly South Region. She has a charming and gentle personality.

Han Yunzhi met a Qi Condensation stage Han Li in a trade market before the Great Immortal Ascension Assembly had commenced. Along with her elder brother, she was running a stall that was trading various goods such as spiritual talismans. She sold Han Li the Golden Sincerity Brush[1] that was handed down as inheritance from her clan. During a conversation, she humored Han Li with her mannerisms.

Trial by Blood and Fire[]

Sometime after, Han Yunzhi joined the Spirit Beast Mountain sect and participated in the Trial by Blood and Fire to gain the resources to obtain a Foundation Establishment Pill. Upon arriving at the staging area, she took notice of Han Li's presence evasively looking at Han Li[2]. Han Li found this particular trait of hers, charming. However, in Han Yunzhi's brief time with the Spirit Beast Mountain she had drawn the attention of another possessive Qi Condensation senior that misinterpreted her timid behavior as flirting with Han Li[3]. Thankfully, Han Yunzhi's problem with this particular senior would be resolve when Han Li killed him during the trial[4].

During the trial, Han Yunzhi found Fierce Yang Blossoms, a material she needed to obtain, near a stone temple. However, this resulted in a conflict with another Qi Condensation cultivator from the Giant Sword Sect who was unwilling to let her have a portion of the flowers[5]. Her abilities were insufficient and she lost the battle. Right before the Giant Sword Sect cultivator was about to execute her, Han Li stepped in and saved her by killing the cultivator.

On this 3rd meeting, Han Yunzhi exchanged her name with Han Li for the first time. After a brief exchange, Han Li allowed her to obtain a few flowers. However, before she could she was knocked unconscious by Han Li. Using needle techniques and a Forgetful Dust Pill, Han Li suppressed her short-term memory of their encounter[6]. When she awoke she found herself in possession of Fierce Yang Blossoms confused trying to recall how she obtained them.

Han Yunzi exited the trial without any major problems[7] and gave Han Li a warm smile as she left with her fellow peers returning to the Spirit Beast Mountain.

After the Spirit Beast Mountain betrayed the Seven Sects of the State of Yue in the war against the Six Devil Dao Sects, Han Yunzhi was absorbed into the Spirit Controlling Sect. As a favored descendant of the Han family, she was helped by an ancestor who cleansed her essence allowing her to reach the Core Formation stage[8]. As a Core Formation cultivator, she became a candidate to fuse with one of the wood-attributed Spirit Nascents cultivated by the Spirit Controlling Sect[9]. Han Yunzhi was given a special cultivation art to fuse with the Spirit Nascent that allowed her to sense the whereabouts of the Spirit Nascent.

After the wood-attributed Spirit Nascent was captured by Han Li, Han Yunzhi and another fusion candidate Liu Yu were both sent to find and re-capture the rogue Spirit Nascent[10]. As a result of their search, Han Yunzhi met an Early-Nascent Soul stage Han Li as he detected her lingering spiritual sense that allowed her to locate the Spirit Nascent[11]. Not knowing the Nascent Soul cultivator was Han Li, she along with Liu Yu fled towards a group of Ghost Spirit Sect cultivators. After a brief exchange, the group detected the hostile spiritual sense of a Nascent Soul (Han Li) cultivator. Han Yunzhi used the chaos of the fleeing group to make her own escape by fleeing in a different direction[12].

Unfortunately, with her speed she could not outrun Han Li using his Thunderstorm Wings[13]. Luckily, Han Yunzhi was recognized by Han Li and rendered unconscious instead of outright killed like Ghost Spirit Sect cultivators[13]. When she awoke unharmed, she recalled that the Nascent Soul cultivator seemed to recognize her but when she searched her own memories she didn't recall knowing or befriending any Nascent Soul cultivators. Additionally, she was unable to clearly see who the cultivator was during the attack. She returned to the Spirit Controlling Sect unaware that she had her fourth encounter with Han Li[13].

Upon return, Han Yunzhi reported her findings and loss of her peer Liu Yu to the Nascent Soul elders of the Spirit Controlling Sect[8]. She was unknowingly spared by these Nascent Soul elders who wanted to use the Soul Searching Technique to forcibly extract what had occurred. 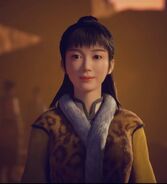