A Record of a Mortal is Journey to Immortality Wiki
Register
Don't have an account?
Sign In
Advertisement
in: Characters, Female, Core Formation,
and 5 more

While being at Qi Condensation stage, Xiao Cui'er and her granfather Xiao Zhen attended a banquet of Prince Xin in the capitol, Yuejing. There, they drew attention of Han Li, who was guarding Qin Clan on behest of his Master Li Huayuan, with their Spiritual Qi concealment technique. At first, Xiao Zhen assumed Han Li was some clan's frivolous young master that had seen through his granddaughter's disguise and was looking at her with an obscene gaze. As he used Nightmare Technique to scare him away, his consciousness suddenly fell under youngster's control. He was greatly suprised by this, and then saw Han Li as superior cultivator.[1] After the banquet, they met,[2] because Han Li wanted to trade for their Qi Restraining Technique. Xiao Cui'er was impressed by his abilities.

Later, they met again for trade.[3] In exchange for technique, Xiao Zhen asked Han Li to take Xiao Cui'er as disciple.[4] Han Li refused that, but he promised to introduce her to his Senior Martial Brother Ma.[5]

Soon after, the war against the Six Devil Dao Sects came to conclusion and Yellow Maple Valley had to evacuate from the State of Yue.[7] Remains of the Six Sects of the State of Yue took refuge with the Nine Nations Union.[8]

After 100 years of relative peace, Moulan invaded the Nine Nations Union.[9] In meantime, Xiao Cui'er reached an early Core Formation stage thanks to her good Spiritual Roots. One day, she was on a patrol with group of Foundation Establishment cultivators, Xiao Cui'er met Han Li after about 180 years. He gave her a magic treasure and medicine pills for cultivation. [10] 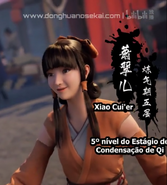